RIP Flash – Is Your Site Affected?

Adobe Flash has been around for a long time – it powered some of the earliest multimedia sites on the Internet and I’m sure you wasted several hours playing games online because of it. Even when YouTube launched in 2005, it was built on Flash. While the use of Flash in web design has declined in the last five years or so, many sites still employ Flash to fill in gaps, specifically in multimedia and advertising. Well, time to take a hard look at your site because Mozilla Firefox dealt a significant blow to the fledgling platform by blocking the Adobe Flash plugin by default in all their current browsers.

Back in 2009, the first nail was driven into Flash’s coffin by Steve Jobs, who committed to never having Flash support on Apple’s touch-based products because of the plugin’s spotty security record and stability. And up until yesterday, those concerns still carried weight. Now it seems that Mozilla decided to be the first major browser to essentially pull support for Flash.

So what does this change mean for the typical Firefox user?

When a Firefox user visits a Flash-enabled website, instead of seeing this (we’re using the site of a design agency Sensisoft, which in 2009 was named a “Beautiful Flash Website” by Smashing Magazine): 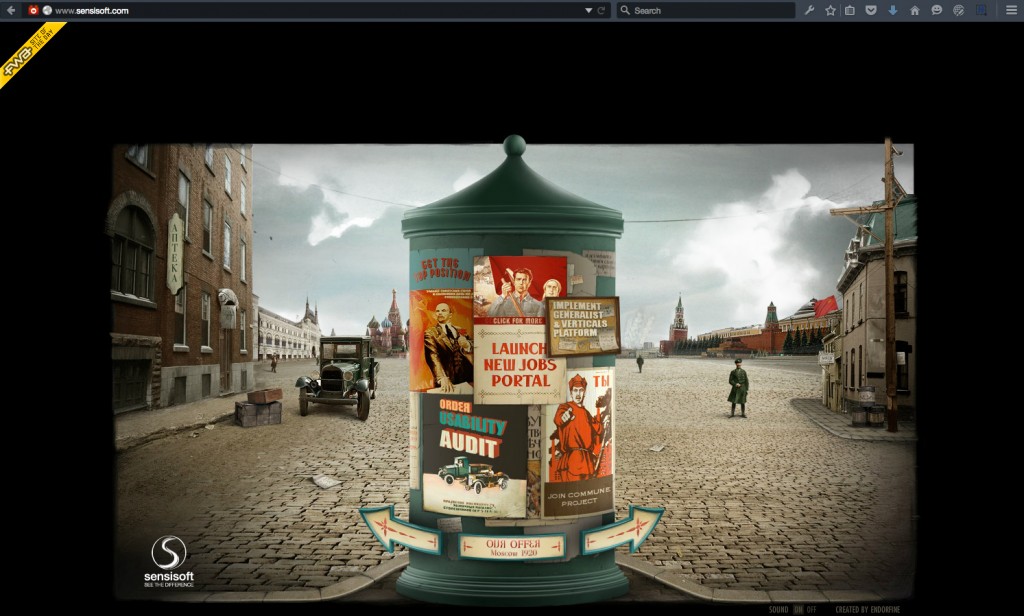 It was a beautifully-designed Flash experience.

You’ll find this on the Firefox browser: 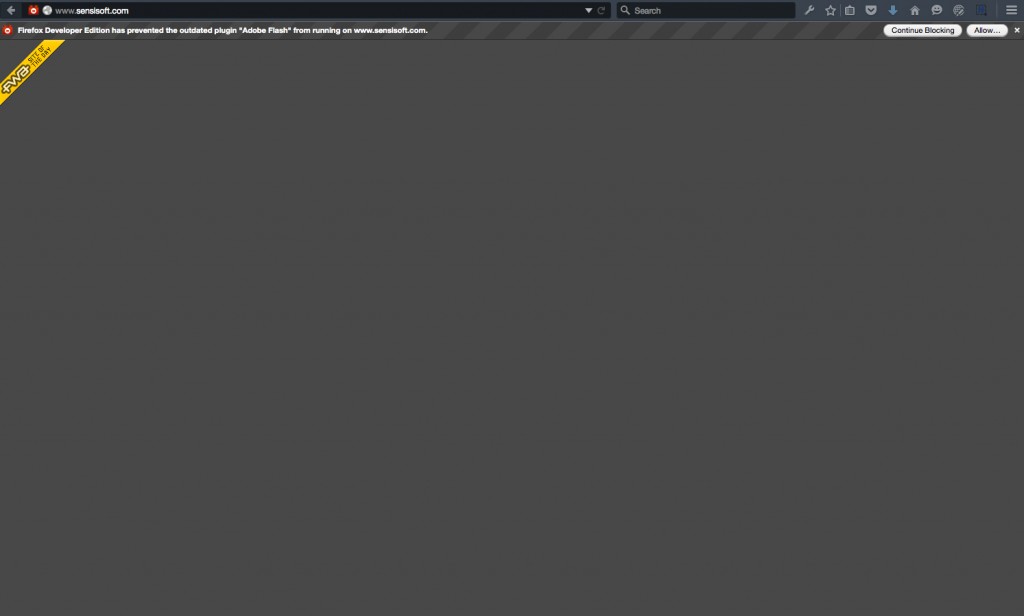 Not nearly as beautiful.

Upon closer examination, you can see a thin alert bar at the top:

At Envy Creative, we use the Firefox Developer Edition, but this same alert will be shown on the normal Firefox browser.

Needless to say, Firefox tries it best to make the experience of navigating a Flash-enabled site a pain, which is not good from a user experience standpoint. Visitors to sites like Sensisoft have essentially been given an extra step in order to view content. In web design circles, the less obstacles the better.

An Entire Industry Against Flash

The “outdated” plugin is kind of a misnomer – sure, Adobe Flash is infrequently updated (though, Adobe did push through an update today to try and mitigate the Firefox quasi-ban, so we’ll see what that does), but this has little to do with the lack of updates. The powers that be at Firefox and elsewhere around the Internet have determined that now is the right time for Flash to die.

Here’s what Mark Schmidt, Support Lead at Firefox, tweeted out earlier today (he’s actually been on a roll with the Flash tweets, so just check out his Twitter feed):

BIG NEWS!! All versions of Flash are blocked by default in Firefox as of now. https://t.co/4SjVoqKPrR#tech#infosecpic.twitter.com/VRws3L0CBW

And it’s not just Schmidt who is leading the charge. The Chief Security Officer at Facebook, Alex Stamos, added this:

It is time for Adobe to announce the end-of-life date for Flash and to ask the browsers to set killbits on the same day.

The main reason people like Schmidt and Stamos have come out against Flash is because the plugin is just a pain from every angle: it’s so broken that most malware take advantage of its vulnerabilities and it eats up resources at an alarming rate. The antiquated Flash has long outlived it’s usefulness and now it is just causing more problems than it solves.

I Have Some Flash On My Site…Now What?

If you have a site that employs Flash, whether it is as an entire site design or if you are using it to deliver particular assets, you might be wondering how big of a problem is this actually is. Well, here are the most recent estimates for global browser use over the last year: 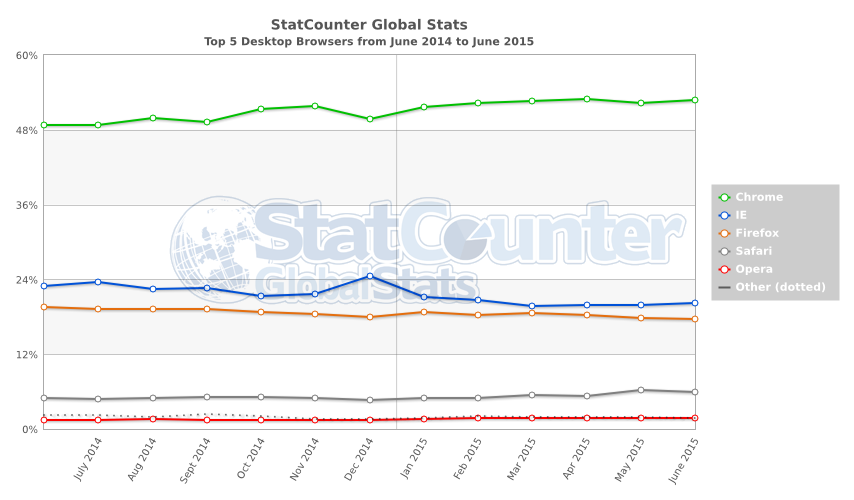 Roughly 20% of Internet users rely on Firefox, so that’s a massive chuck of userbase for some websites. Imagine only delivering your information to 4/5 of the audience you did yesterday – that’s pretty scary, but don’t panic, there are plenty of solutions. First, if you are using Flash to deliver ads or other multimedia assets, just swap those out with hosted embeds. That’s a simple fix and your users, especially those on mobile, will thank you.

If you have an entire website design that uses Flash as a foundation, perhaps it is time to consider a redesign. Either going to a straight HTML design using your old site as a blueprint or completely redesigning your site in a Content Management System are excellent choices, and neither are particularly cost-prohibitive depending on the scope of the site. Shoot me an email today and I can help guide you through this change.

Not Long For This World

It seems like Adobe Flash is nearing the end of its life, and it is really up to the other major browsers (Google Chrome, Microsoft Internet Explorer, and Apple Safari) to finally kill off the plugin because it seems like Adobe has no plans to do it themselves. Listen, Flash was great when it first came around: it opened the Internet up to being more than just a bunch of static information on a page. Flash helped get video streaming to a broader group of people, made browser-based gaming a possibility, and changed how people interact with site design. It did a lot of useful things and has shaped the modern Internet…but it is time for it to go. Hopefully, Adobe will let Flash go out with a little dignity instead of being summarily executed by every major browser. 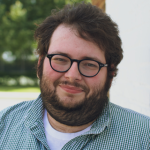 Michael is Partner at Envy Creative and serves as Lead Developer. Since 2010, every website by Envy Creative has used current web standards, and thus, have never employed Adobe Flash as an element of site design.

Have a question about moving away from Adobe Flash? Contact Mike and Envy Creative today.

We want to hear from you Recharge your brand & take your site to the next level. Shoot us an email or give us a call. We want to hear about your project Contact Us Today